What We 'Know' About Sarah, the North Hall Ghost

There are just too many questions about Sarah the North Hall ghost for us to not put some information about her online. This is just the beginning, so bear with us. And if you have anything to add, please let us know.

The legend: Supposedly a student fell to her death in the atrium of North Hall. Some say she jumped. Some say she fell. Many say the building is haunted by her ghost. The legend has lots of variations. Every time we hear it, it's different.

The known: North Hall was built in the 1870s, but it didn't look like it does today. The renovation/expansion which added the atrium (a.k.a. the Well) was completed in about 1908. According to one source, the Well was boarded over for fire safety reasons in summer 1930. And in the 1970s the building was closed. So, if there was a death, it would need to be in the period between when the Well was built and before it was boarded up, 1908-1930.

The unknown: Who the ghost is, if there is one. While there are theories, we can't identify a student that is the basis of the Sarah story.

The proof: There isn't any one way or the other. Several university classes and employees have tried to identify the basis of the legend, but no one has found the girl who supposedly met her end at the bottom of the Well.

Is it possible that this entry in the 1866 catalog is the source of the name "Sarah" for the ghost of North Hall? It doesn't match the time frame of when the Well was open, but the ghost doesn't appear to have a name until the 1980s or so (A "Flashlight" article from 1992 didn't refer to her by name). Perhaps the legend got someone looking in the University Archives. When they found the name and 'deceased' they assumed it was the girl. No one knows for sure, but it was an interesting find.

Paranormal Findings: The "Truth" Behind Sarah the Ghost

For National Library Week 2013, we held a 100-word essay contest.  Here is the winning essay by Samantha Lienhard.

"One hour from midnight, the library is about to close. I hurry through the darkened halls, racing to retrieve the book I meant to take with me and nearly forgot. I am lucky they are willing to let me go back for it this late.

The staircase creaks as I near the third floor room where my book lies forgotten on a table. As I near the doorway, I see the pale figure of a girl leaning over my book.

I gasp in shock, and she is gone. Only the book remains: open, when I know I had closed it." 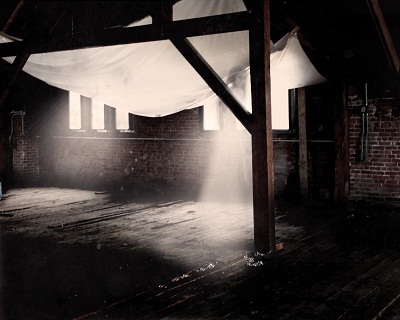 Haunted halls : ghostlore of American college campuses
by Elizabeth Tucker
Sarah is discussed in the chapter "Desperate Lovers" under the heading "Scorned Girlfriends", pages 123-127.
Not available online. Ask Librarian Sheila Kasperek if you are interested in reading it.

North Hall ghost is discussed on pp. 71-75 in the chapter "Haunted Libraries of Pennsylvania" by Elizabeth Williams-Herrman.
Not available online. Ask Librarian Sheila Kasperek if you are interested in reading it.